Our virtualized version of CPE, called virtual Subscriber Gateway (vSG), runs a bundle of subscriber-selected functions, but does so on commodity hardware located in the Central Office rather than on the customer’s premises. There is still a device in the home (which we still refer to as the CPE), but it can be reduced to a bare-metal switch, with most of the functionality that ran on the original CPE moved into CO and running in a virtual compute instance (e.g., a VM or container) on commodity servers.

The CORD architecture permits a wide range of implementation choices for vSG. There are two underlying design issues: functionality and performance.

The first issue is how to implement the set of features (consumer services) that make up the bundle’s functionality. Options range from highly configurable systems like Click, to to an ad hoc combination of Linux capabilities (e.g., iptables, tc, dnsmasq). This first issue is primarily about functionality and agility.

To date, we have focused on a simple subscriber bundle implemented in Linux. CORD supports a Northbound Interface (NBI) that lets subscribers and operators select and control individual features (e.g., set parental control parameters on specific devices), with the corresponding feature implemented by a particular configuration of Linux (e.g., using dnsmasq to forward DNS traffic to an external parental control service).

A second issue is how to map subscriber bundles onto the underlying hardware resources. Options include packaging each bundle in its own VM, in a lightweight container running on bare metal, in a container embedded in a VM, or in a collection of containers. This second issue is primarily about performance and scalability.

To date, we have experimented with several strategies for implementing bundles on the underlying servers. These include:

The current design implements a bundle of subscriber features in Linux, running in the container bound to that subscriber. The reference implementation supports basic Internet connectivity, as well as a collection of optional features, including:

The current design settles on a variant of a Container-in-VM configuration, but this is subject to change as we better understand the performance limits. The key challenge is how the container is logically connected to the network. We summarize the current implementation as follows. 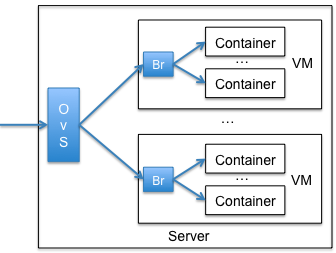 On the WAN-side, both incoming and outgoing packets are labeled with a distinguished VLAN (tag=500) to indicate that they should be (a) sent to the container’s WAN interface, and (b) processed by vRouter.  This tag is added/stripped inside the VM.

CORD defines a Northbound API for controlling subscriber access, for example, adjusting the uplink and downlink speeds, suspending and resuming connectivity, setting parental control levels, and so on. Strictly speaking, this is an interface to CORD’s subscriber object (not the vSG service per-se), where CORD dispatches each requested operation to the appropriate service in the service graph.

The current API is sufficient to support the Customer Care portal in the reference implementation, but it is undergoing significant refactoring. An updated specification will be included in future versions of this document.