Each deployment is different in terms of protocols and features required, so this guide aims to be a general overview of how to set up CORD to communicate with external routers. The operator will have to customize the configurations to be appropriate for their deployment.

Deploying the vRouter infrastructure is a relatively manual process right now. Automating this process was not a target for the first release, but over time the process will become more automated and more in line with the rest of the CORD deployment.

This guide assumes that you have run through the POD install procedure outlined here. You must also have installed the fabric ONOS cluster and connected the fabric switches to that controller. 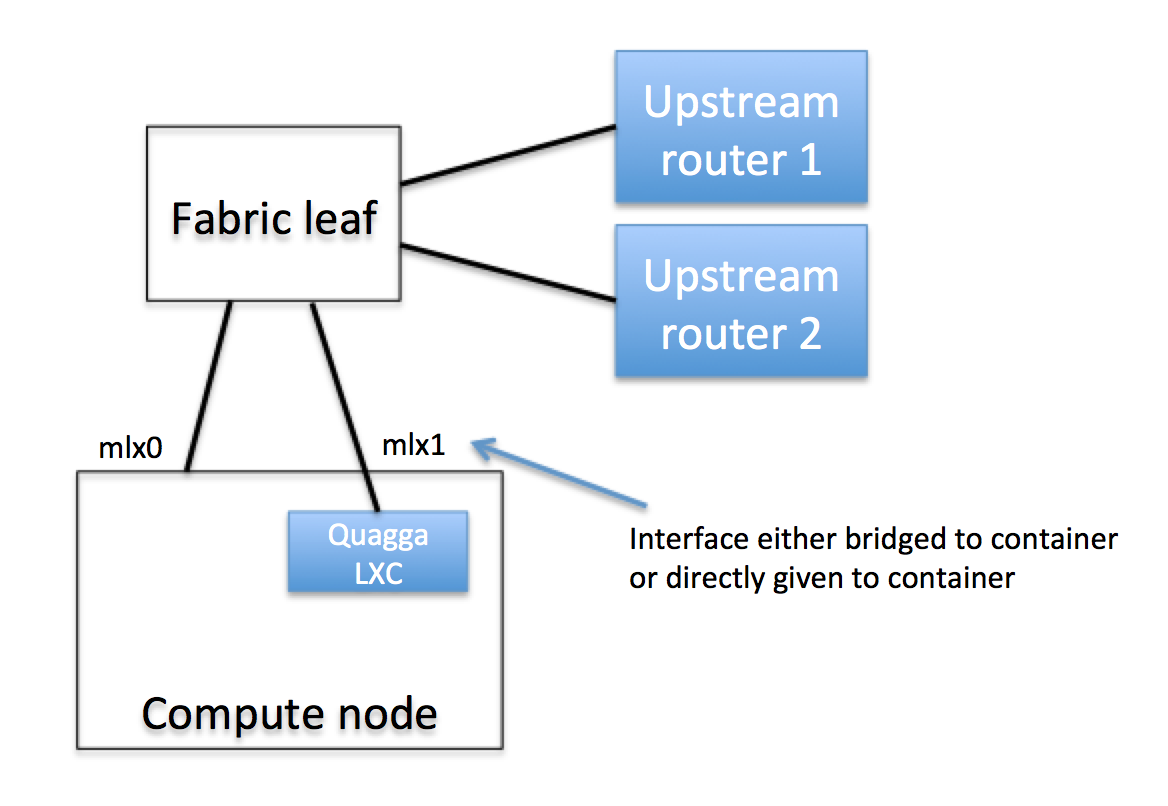 Dedicating an interface connected to the fabric

The CORD automation determines which NICs on each compute node are connected to the fabric and puts these NICs into a bonded interface. The name of this bond is fabric, so if you run ifconfig on the compute node you have selected to deploy Quagga, you should see this bonded interface appear in the output.

You should see a stanza that looks like this:

Simply remove the line bond-master fabric, save the file then restart the networking service or reboot the compute node.

vRouter makes use of the Quagga routing protocol stacks for communicating with upstream routers. The correct version of Quagga must be deployed, connected to they physical network, and configured to peer with the upstream.

Quagga needs to be run in a container on one of the compute nodes in the CORD system. Eventually this would be deployed as a service in the same way as other services, but in the meantime this container must be provisioned manually. Quagga should run inside a container, because it wants to program the kernel routing table and this should be isolated from the host the container runs on. The container needs to have a direct physical connection to a fabric leaf switch (see Figure 1). This must be the same fabric leaf switch that the upstream routers are connected to. The container also needs to be able to access the management network so that it can communicate with the ONOS cluster.

We require a patched version of Quagga that allows Quagga to connect to the ONOS cluster, which means we need to install Quagga from source.

The FPM patch can be found here: fpm-remote.diff

Download the quagga source and FPM patch into the LXC container.

Then, we can extract the source, apply the patch and build Quagga:

Now Quagga should be built and installed in the container.

You should already have an ONOS cluster with the segment routing application running that will be controlling the physical hardware switches. On this cluster we need to configure and run vRouter.

It is helpful to think of the vRouter as abstracting the entire CORD POD as a single router, and that the outside routers think that they are talking with just another router when they are communicating with the CORD pod.

For example, if we are communicating with two upstream routers, then a logical view of what we are trying to set up would look like Figure 2: 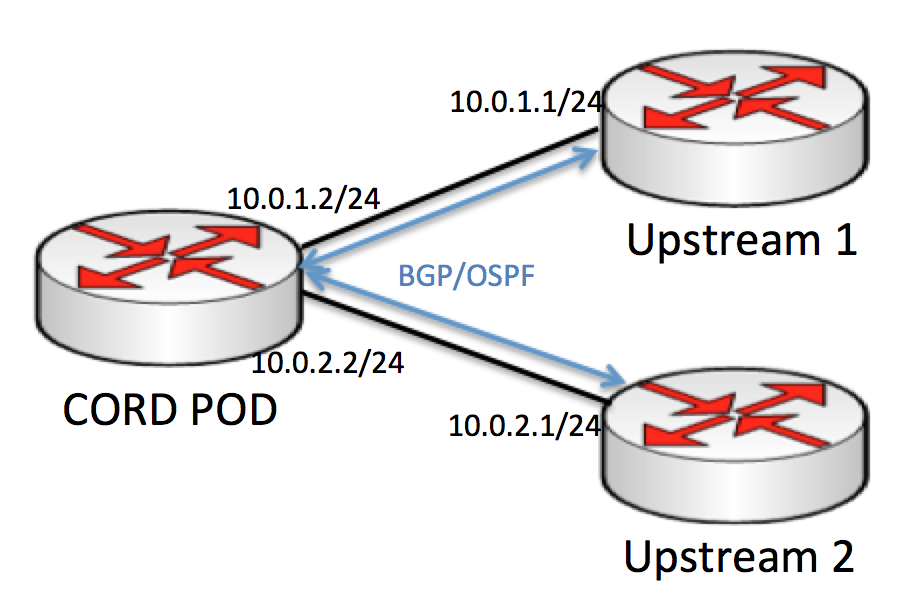 In reality, the physical implementation of that looks more like Figure 3: 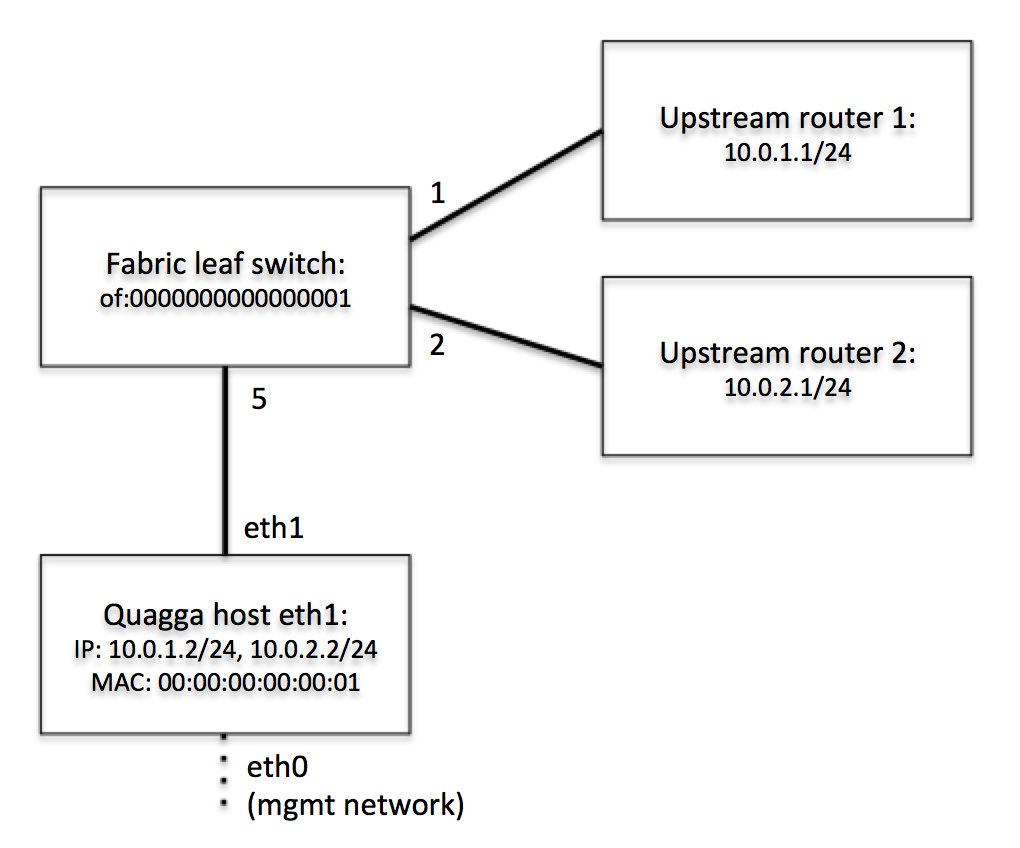 Note that the interface configuration is applied to the ports that the upstream routers are connected to (see Figure 3). We configure interfaces on these ports because ONOS is going to make it appear as though there is an IP address configured on this port of the switch (e.g. by responding to ARP requests with the configured MAC address). Again, this switch will look like a router to the external routers.

There is no interface configuration required on the port that Quagga instances connects to.

Then, the vRouter app itself needs to be configured.

Finally, there is some extra configuration for the segment routing app that allows it to work properly in conjunction with the vRouter:

If Segment routing was already running, it may be necessary to deactivate and reactivate it to ensure it reads the new configuration.

The vRouter application should be activated as well.

At this point if ONOS is set up correctly, the internal Quagga host should be able to talk with the external upstream routers. You can verify this by pinging from the Quagga container to the upstream routers.

If that is successful, the final step is to configure Quagga to communicate with upstream routers, and also to send routes to ONOS. This configuration of Quagga is going to be highly dependent on the configuration of the upstream network, so it won't be possible to give comprehensive configuration examples here. I recommend checking out the Quagga documentation for exhaustive information on Quagga's capabilities and configuration. Here I will attempt to provide a few basic examples of Quagga configuration to get you started. You'll have to enhance these with the features and functions that are needd in your network.

Regardless of which routing protocols you are using in your network, it is important to configure Zebra's FPM connection to send routes to the vRouter app running on ONOS. This feature was enabled by the patch that was applied earlier when we installed Quagga.

The FPM connection IP address is the IP address of one of the ONOS instances that are running the vRouter app.

Of course if you have other configuration that needs to go in zebrad.conf you should add that here as well.

The Quagga daemons must be started manually for now. By default they will start as user 'quagga', so make sure that user exists and can read and write the config files. Substitute in the correct paths to the daemons and config files if they are different.

Quagga should now be able to communicate with the upstream routers, and should be able to learn routes and send them to ONOS. ONOS will program them in the data plane, and the internal hosts should then be able to reach the internet.

XOS must be configured to use the same public IP addresses that are specified in the bgpd configuration. In the example above, this address block is 192.168.0.0/16.

To configure XOS, edit the file cord-services.yaml in service-profile/cord-pod. Find the address_pool definitions. In the default XOS cord-pod configuration, these are called addresses_vsg and addresses_exampleservice. The addresses property of these address pools must like within the same subnet specified in the bgpd configuration, and they must not overlap. It's alright to subdivide the bgpd address block into smaller non-overlapping subnets. For example, you could split 192.168.0.0/16 into 192.168.0.0/15 and 192.168.128.0/15.