Residential subscribers connect to CORD via a GPON network. The head-end node of the GPON network is called an OLT, which traditionally is chassis based monolithic hardware available from several vendors. In CORD, we disaggregate the OLT, by keeping only the OLT physical layer in dedicated hardware (called OLT-MACs), and moving all other functions into software distributed over the CORD cloud (see Figure 1). One such function is a Subscriber Gateway, which is implemented by a container [3].

This residential access infrastructure (Figure 4) is handled by the vOLT control application, in concert with XOS; details can be found in other design notes [4]. Once the customer has been identified and authenticated,  the double-VLAN tags have been assigned for the customer, and a vSG container has been instantiated in a compute-node, the fabric-control application is informed of the location of the OLT blade the subscriber is connected to, and the compute node where the vSG container has been instantiated. The app then programs forwarding rules in the fabric to enable this communication through the fabric. 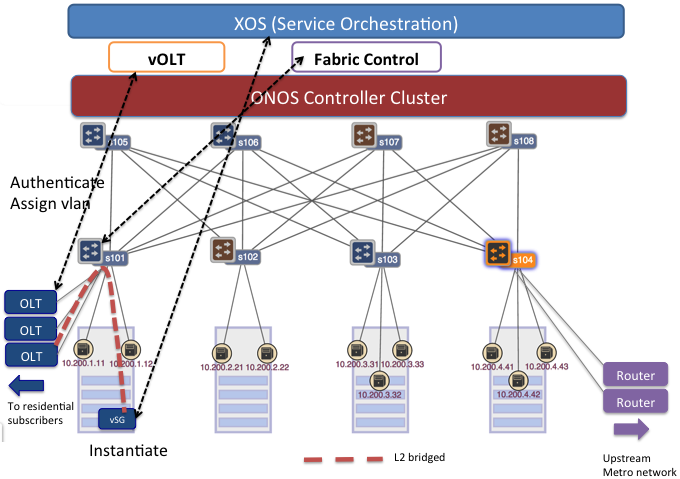 Typically, the OLT blade and vSG containers are physically located in the same rack and therefore connected to the same Top-of-Rack leaf switch. In this case, the communication is enabled in the fabric via a VLAN cross-connect. The cross-connect is a special case of L2 bridging where the forwarding is based on just the VLAN headers, while ignoring the destination MAC addresses, of which there could be many from the same subscriber (different home devices). The fabric does not need to learn or have any a priori knowledge of these MAC addresses. It simply needs to connect the VLANs identifying the subscriber to the physical port on which the compute-node hosting the vSG for that subscriber is located. As a result, a particular vlan-crossconnect is always implemented between exactly two physical ports on the same leaf-switch. Note that the same physical port on the leaf switches can support multiple vlan-crossconnects simultaneously. In future releases, we will add the ability to physically locate the vSG containers anywhere in the CORD cloud (instead of the same rack as the OLT blades).