The description of vRouter on this page is obsolete in some parts, and will be updated soon

In legacy CO environments, a Broadband Network Gateway (BNG) device aggregates subscriber connections and routes traffic to and from the core network. In the disaggregated CORD architecture we no longer have a BNG device as the gateway to the CO, and instead we implement the necessary routing functionality as a virtual router (vRouter) service. The vRouter service does not implement all functionality that exists in traditional BNG devices. However, it does implement the functionality necessary to provide Internet access to CORD in a disaggregated fashion.

The purpose of the vRouter service is to be the gateway between the CORD infrastructure and the upstream network and to provide internet access to the subscribers and services within CORD. Logically, it is the final service in the chain that a user's traffic traverses before exiting the CORD system. Physically, it is the interface between CORD and the provider’s upstream network. The vRouter service provides Internet-as-a-service to other services within the CO. The vRouter is implemented as a network control application running on ONOS.

The design of the vRouter service is split into two main parts that are relatively independent from one another – control plane and data plane.

The vRouter has some dataplane devices which it is in control of, and from the external point of view those devices appear as though they are a single router, supporting a set of routing protocols.

Quagga will be configured to communicate with the upstream routers – in the field trial case this will be using OSPF and iBGP.

Quagga defines an interface called the FIB Push Interface (FPI) which enables it to push routes to an external entity. We use this interface to communicate routes from Quagga to ONOS. The ONOS vRouter app acts as the Forwarding Plane Manager (FPM), and is able to receive and decode routes from Quagga. The vRouter app is then able to use these routes to program the dataplane accordingly. 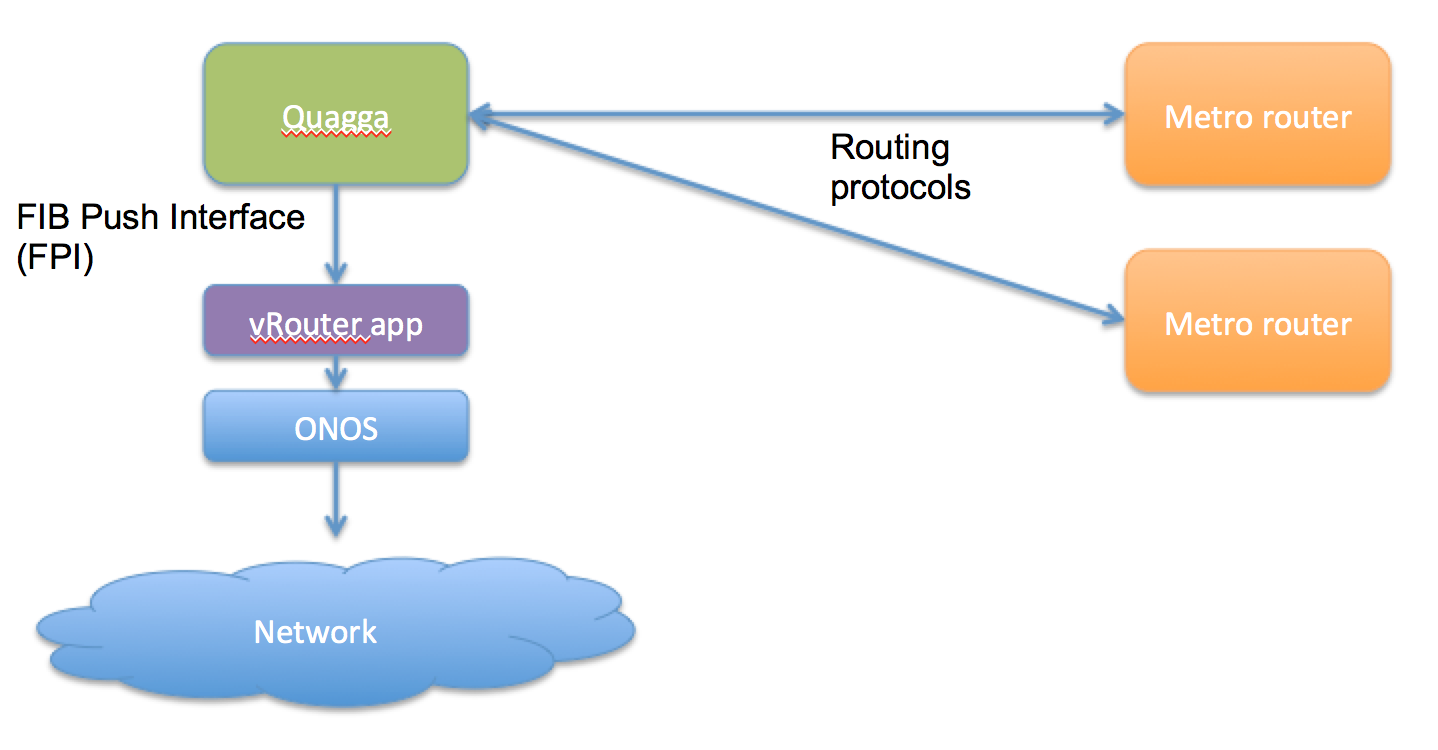 The design of the control plane is similar to the approach used in the ONOS SDN-IP application. The main difference here is that we need to support more than just BGP peering, because we need to support an IGP as well. SDN-IP uses an iBGP connection between Quagga and ONOS, whereas with vRouter we use the FPM interface.

In order for Quagga to be able to communicate with upstream routers, routing control traffic has to flow between Quagga server and the external router. Before any routes are exchanged, the first task of the vRouter app is to program the dataplane to allow this traffic to flow. The Quagga server is connected to a port on the vRouter datapane, and incoming/outgoing routing packets are directed to/from that port. This bypasses the usual routing function of the vRouter because it concerns control plane traffic that is destined for the router itself. 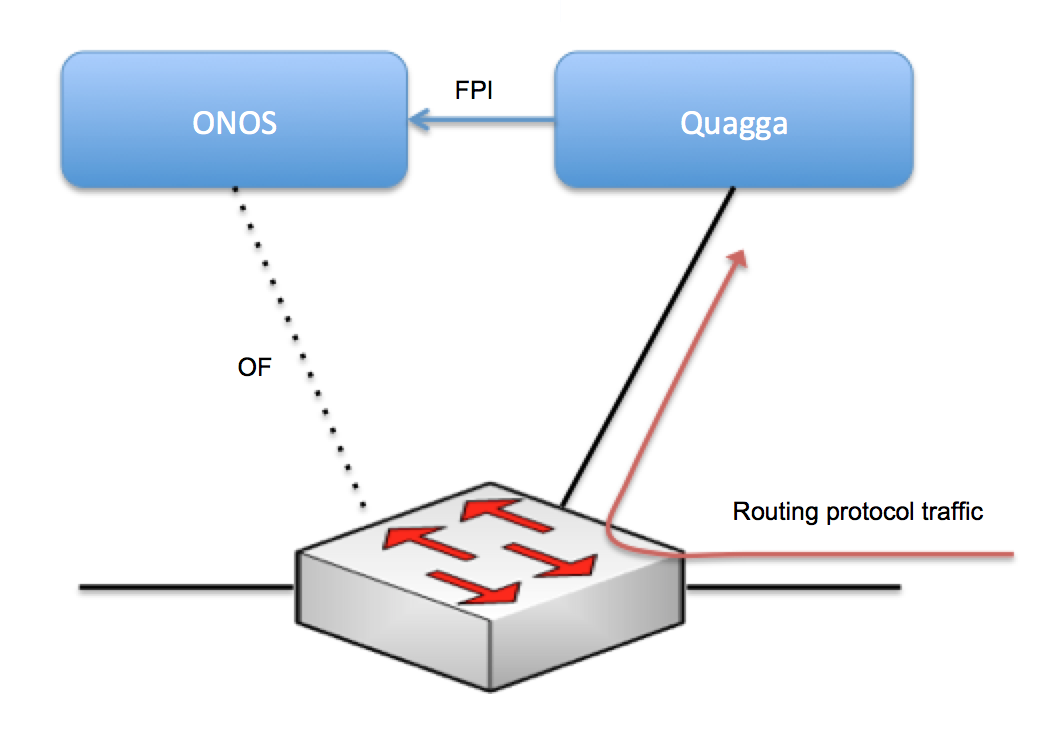 Figure 2: Routing control traffic is handled by redirecting to towards the Quagga instance connected on the dataplane

The vRouter also needs to support PIM-SSM for multicast signalling to the upstream. PIM-SSM will not be handled by Quagga, rather there will be a dedicated ONOS app for managing PIM messages. The PIM app will send PIM join messages upstream when new multicast groups need to be requested. The PIM app will learn of the need for new multicast groups from other control applications within ONOS (ultimately this comes from IGMP snooping at the access devices). The will not be any protocol-based multicast signalling on the dataplane between the fabric and the vRouter - this all happens within ONOS.

vRouter implements a big distributed router on top of the hardware switches of the fabric. To the outside world, CORD appears as a single router.

The dataplane elements that the vRouter talks to are the fabric leaf switches that have uplinks to the upstream routers. vRouter programs the routes it learns into these switches. The rest of the fabric switches contain default routes which point to these edge switches.

The implementation of the vRouter app in ONOS will leverage existing code from other ONOS routing applications. 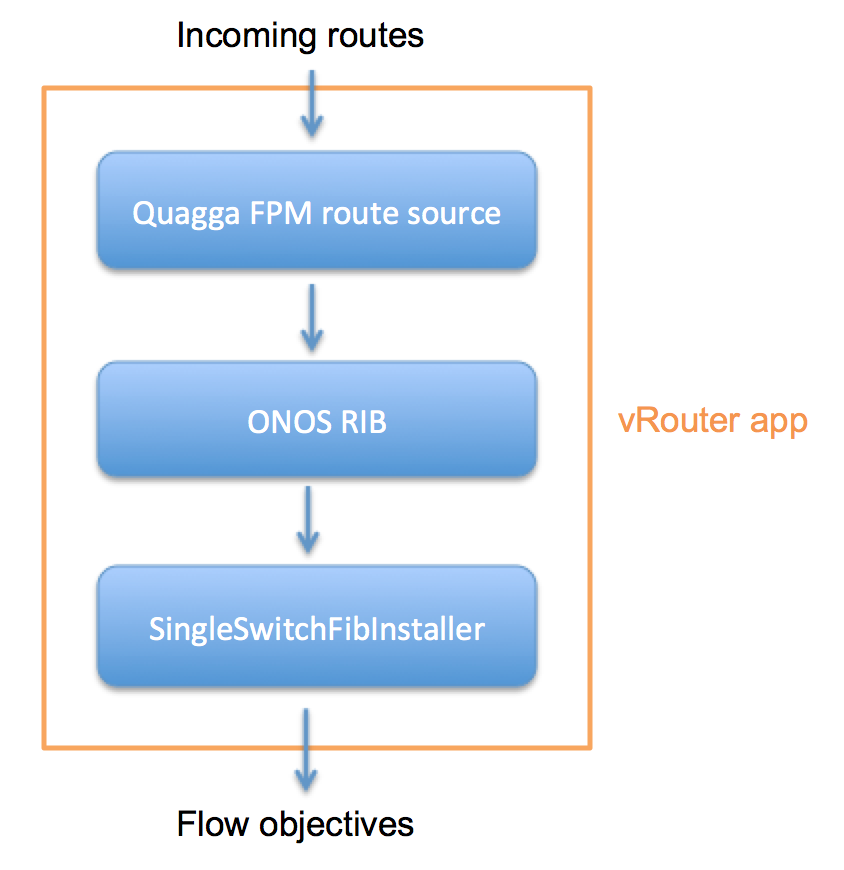 Figure 4: Components that make up the vRouter ONOS app

The architecture of the routing function is shown in Figure 4. Incoming routes from Quagga are received by a Forwarding Plane Manager (FPM) component. This component knows how to decode routes from the external Netlink protocol, and it pushes those routes into the ONOS RIB. The ONOS RIB works to resolve the MAC address of the next hop, and once it has this information it pushes a FIB update to FIB installer component.

Initially for the FIB installer we will reuse a SingleSwitchFibInstaller component which was developed for the ONOS BgpRouter application. This component is designed to install routes into a single switch, thereby turning that switch into an IP router. The component will generate FlowObjectives and submit them to ONOS.