This page describes how to set up a Mininet environment for emulating metro (multi-domain) networks. It also details the steps involved in testing various ONOS features related to the Packet/Optical and E-CORD use cases.

It is advisable to work through Development Environment before continuing, since this page builds on the conventions and information there.

We model a metro network with multiple "central office fabrics" (anything ranging from a single OVS to a set of CPqD soft switches in a clos topology) joined together by a "metro core" of Linc-OE soft ROADMs. The figure below shows an example with three central offices (blue squares) connected to an optical core of three ROADMs (pink square). 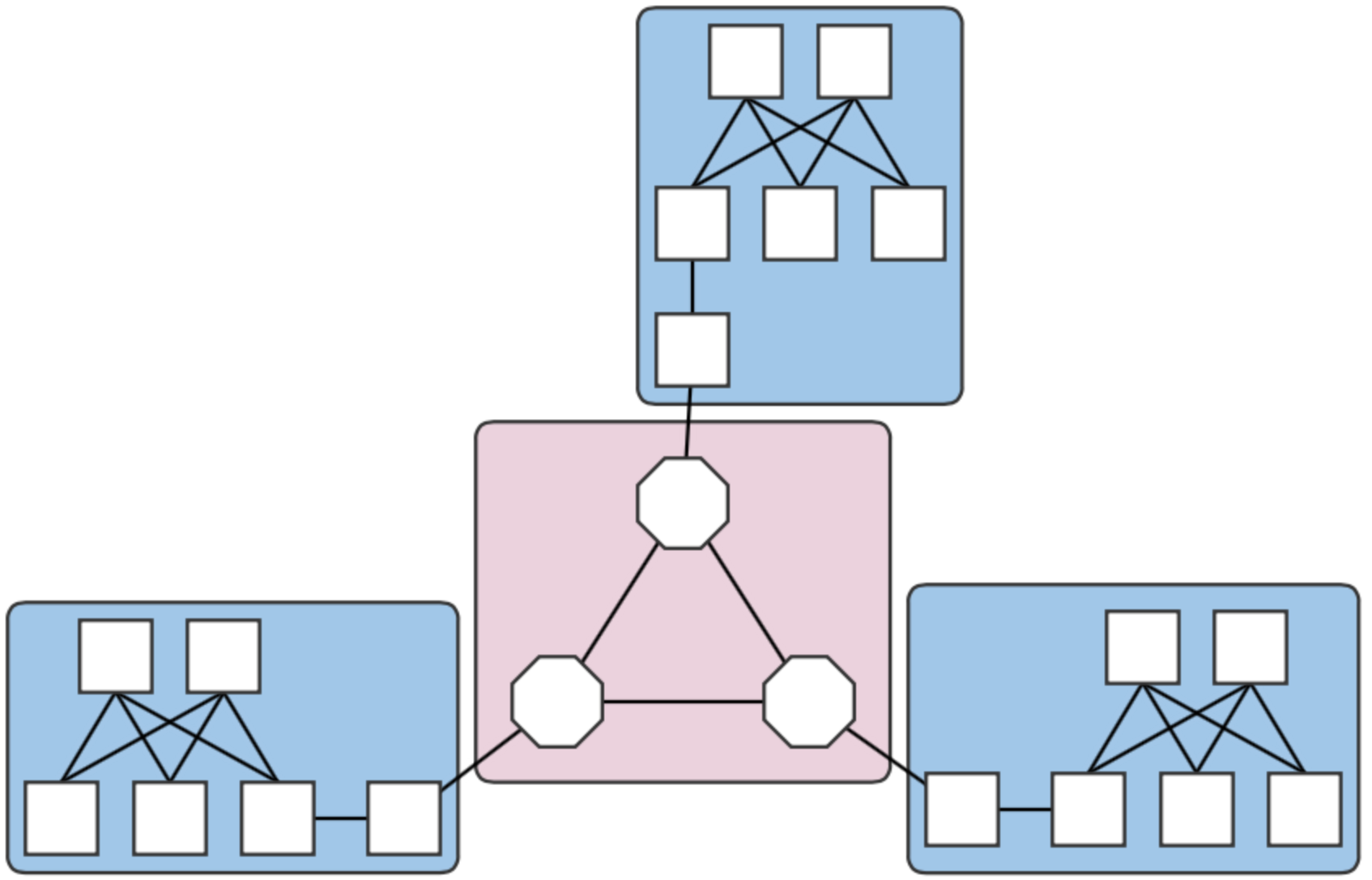 Each central office and the core are different domains, i.e. regions controlled by different (sets of) controllers. The example above therefore contains four domains. Note that the white squares attaching the clos topologies to the Linc nodes are OVS instances. They are required in the emulation due to shortcomings in the way Linc switches are handled by the emulator, and does not reflect a realistic (albeit sufficient for testing) topology.

Follow the installation instructions in The Packet Optical Dev Environment - Mininet. Note that in this scenario, the OC variables in the cell file are interpreted differently. Each OC variable will refer to an ONOS instance that may or may not be in the same cluster.

For ease of deployment, it is best to have a terminal per cell open on the build machine. While not necessary, this cuts back on extra typing to switch among cells and potential mistakes from working in the wrong cell environment.

This is currently a order-sensitive procedure. The following steps refer to the terminal loaded with the cell, and the CLI for the cluster controlling a domain by its domain. For example, the terminal with the metro cell definitions will be called the 'metro cell', and the CLI of the ONOS instance in that cell, the 'metro CLI'.

Once the ONOS instances are deployed as described in the sections above, the script metro.py found in ${ONOS_ROOT}/tools/test/topos can be used to emulate an n-domain metro network similar to the topology in the figure at the top of the page.

metro.py expects comma-separated lists of IP addresses, one per domain. The script is run as follows from the Mininet VM:

The first list of IPs is assigned to the metro core (Domain 0), and the rest, to the central offices (Domains 1,2, and 3) in Domain ID order. The Domain IDs are defined internally within the script. At this point, the assigned domains should appear in the GUIs of the controllers.

For an example where the CO domains are all controlled by the same controller (i.e., where the argument is $OC1, $OC2, $OC2, $OC2), the GUIs will show something similar to below: 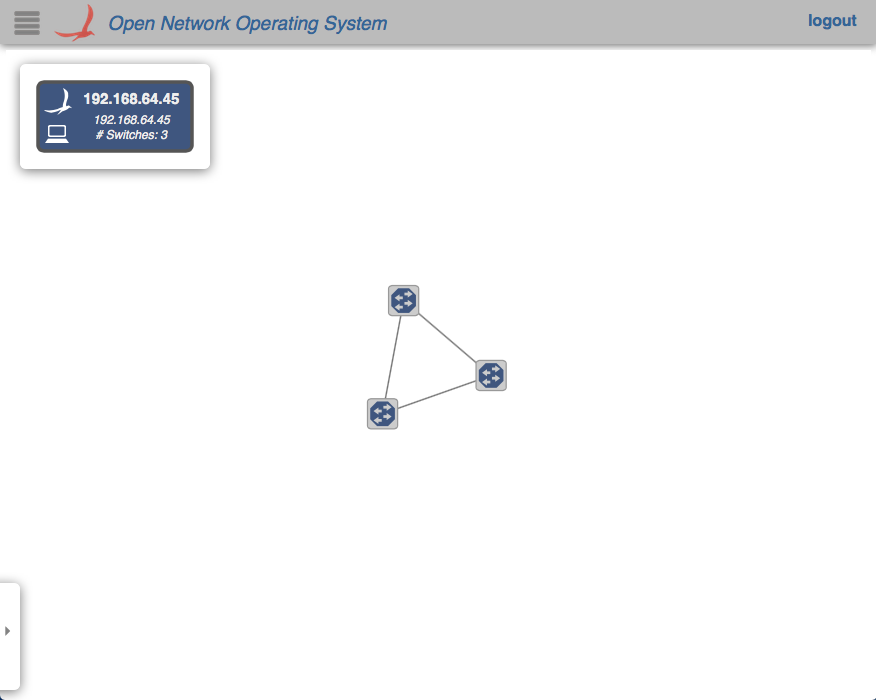 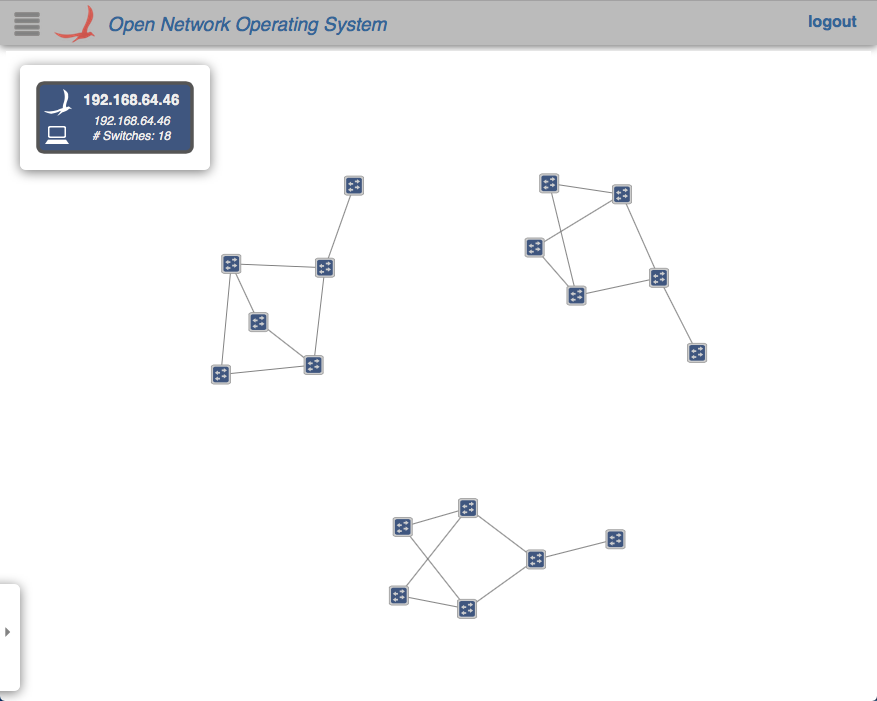 In any case, note how the devices and links that connect to a domain outside of the jurisdiction of a controller do not appear in its GUI's topology view.

Several additional multi-domain topologies can be found in the ecord-topos repo. The topologies that use Linc will need access to opticalUtils.py.

The Domain class can be used to emulate more general, non-packet/optical multi-domain networks in which subsections of networks are controlled by different controller clusters. The easiest way to do this is to either import, or copy the class into a script. A simple, two-domain example of this mode of use can be found attached.

The E-CORD application implements a specialized form of link discovery that allows clusters to identify paths to and from other domains, or those that extend outside of the cluster's domain. These paths are advertised to the metro cluster via the gRPC agent so that it can map out these inter-domain paths (virtual links) that pass through the optical core.

The following steps demonstrate this feature on a three-domain network whose COs are single OVS instances, which is very similar to this topology.

We model the CO as a 2x2 leaf-spine fabric. The topology can be emulated by running this script from ${ONOS_ROOT}/tools/test/topo. The Domain implementation has also been moved to a separate file, and should be moved into the same directory as the script.