Typically in CORD, the orchestrator (XOS) would instantiate containers or VMs in compute nodes and inform the fabric (via REST-API) of the IP/MAC and location of the instance. Without the use of XOS, it was necessary to configure the end-hosts (eg. compute nodes) in ONOS via the NetworkConfigHostProvider. With the use of a DHCP server and the ONOS dhcprelay app, this limitation has been removed. It is no longer necessary to configure the fabric with this information, as ONOS can learn the location, mac address, vlan-id and DHCP assigned IP address via the dhcprelay app, during the DHCP discover/offer/request process.

In this release, we add the following new capabilities: 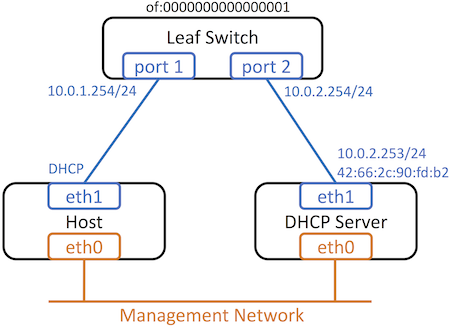 Configuring a DHCP Server connected to a Fabric leaf switch

In this case, the configuration involves first configuring the switch interface with the vlan/subnet the DHCP service is part of.

As before the “ips” and “mac” configured on port 1, actually correspond to the addresses configured in Quagga.

The app config in this case, includes an additional field necessary to inform the dhcp-relay app of the gatewayIP through which the DHCP server can be reached.

Note that the dhcpserverConnectPoint should now be the switchport to which the external router is connected to the fabric.

Modern DHCP servers should support relayed DHCP request. However, the way to configure them are probably different case to case. Here we use isc-dhcp-server on Ubuntu as an example.
To install the DHCP server, simply run:

First, we need to specify which network interface the DHCP server should listen on. To do that, we need to modify /etc/default/isc-dhcp-server and change the following line.

Next, we need to specify the subnet we want to lease. To do that, we need to modify /etc/dhcp/dhcpd.conf and add the following lines.
Note that the subnet of eth1 needs to be included. Otherwise, the DHCP server will not listen to the interface even though we have specified that in /etc/default/isc-dhcp-server.

The host should be able to obtain an IP address from the pool we specified (10.0.1.1-240). Try to run dhclient and see if the host can get an IP address.

If something goes wrong, check /var/log/syslog for DHCP server log and run tcpdump on DHCP server to see if the DHCP packets from the host reach the server correctly.