Configure Hosts in the Fabric

Typically ONOS can discover hosts via ARP or NDP (when using IPv6) or DHCP messages (when using dhcp-relay app) from the hosts.

In certain scenarios, it may be necessary to configure host information in ONOS via the 'netcfghostprovider' app. Assuming DHCP is not being used, and a host does not 'speak' via ARP or NDP,  ONOS would not know the location of this host until it speaks. At this point, if there is some other end-point trying to reach this host, traffic will be black-holed. Of course, one way to get around this is to always use a DHCP relay/server, so ONOS will become aware of the host IP as soon as the DHCP server assigns and acks the IP offer/request.

Another way - eg. in CORD - when an orchestrator is assigning IPs to hosts, it can additionally configure the host information in ONOS as well. This is done via the 'netcfghostprovider' app.

Host configuration via netcfg is shown below.

line 2: Host is identified by mac-address/vlan tuple. In this case vlan -1 means there's no vlan tag.
line 4: IP address of the host. There can be multiple IP addresses.
line 5: The switchport to which this host attaches is identified by device-id/port-number tuple.

Note that when you configure switch ports with subnet information, the hosts in these subnets also need to be configured with the same subnet information. This is irrespective of whether you expect the host to be discovered by ONOS, or you are configuring host information into ONOS (as described in the section above).

The user needs to ensure that the host routing table conforms to the switchport configuration. Consider the following example 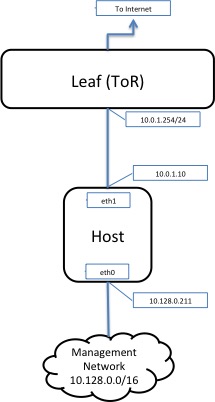