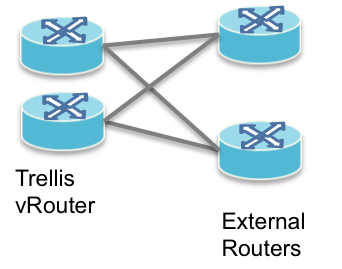 As mentioned before, the Trellis vRouter is NOT a software router - it is not a router in a VM. Previously (in ONOS 1.10.4), the external router viewed the entire Trellis fabric as 1 big router.

In ONOS 1.11.1, we added support for dual external routers, which view the Trellis fabric as 2 individual routers, as shown above.

As before the vRouter control plane is implemented as a combination of Quagga, which peers with the upstream routers, and ONOS which listens to Quagga (via FPM) and programs the underlying fabric. In dual-router scenarios, there are two instances of Quagga required.

Lets consider the simpler case where the external routers are each connected to a single leaf in a ToR pair. 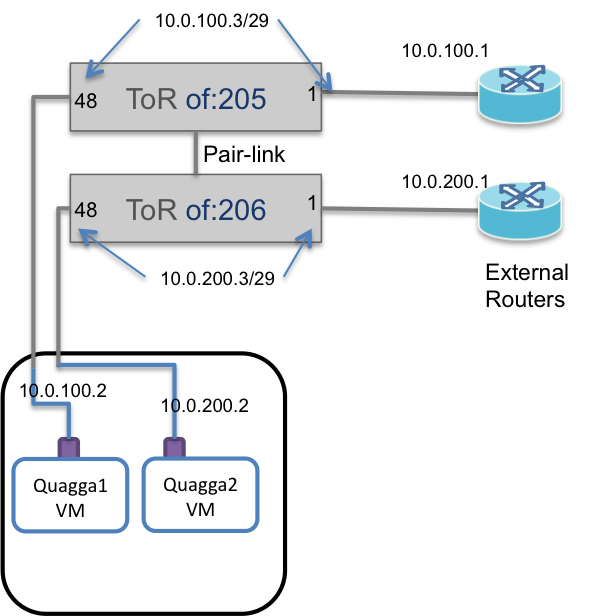 The ToRs are connected via a physical port to separate Quagga VMs or containers. These Quagga instances can be placed in any compute node. They do not need to be in the same server, and are only shown to be co-located for simplicity.

The two Quagga instances do  NOT talk to each other.

in the ToRs follow the same rules as described in the single-router case.

In the example shown above, the switch port config would look like this:

This philosophy is consistent with the fabric use of bridging.

Each instance of Quagga can be downloaded and deployed the same way as described before. Configuring Quagga also follows the same rules described in the single-router case.

There are a few things to remember

Dual-ToRs connected to Both External Routers

Now lets consider the more-complicated but more fault-tolerant case of each Quagga instance peering with BOTH external routers. 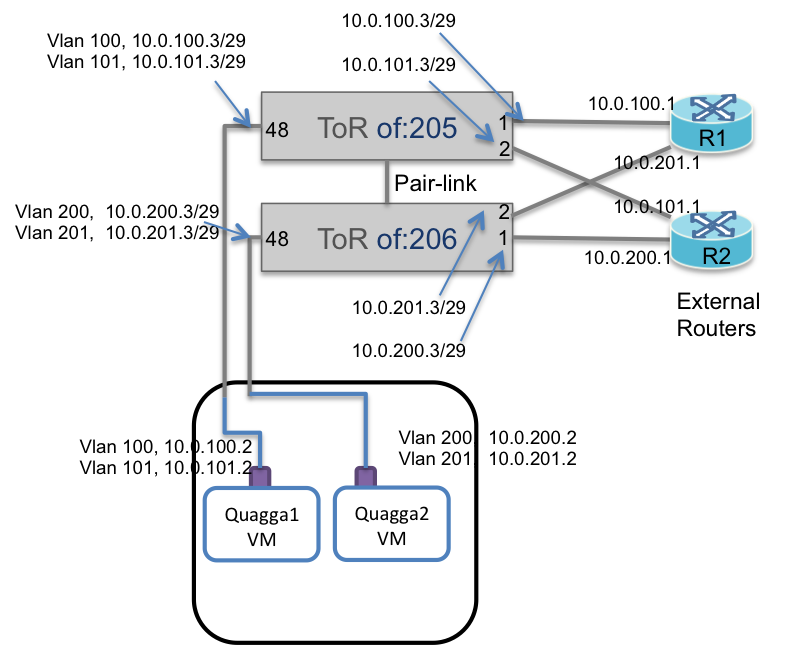 To distinguish between the two peering sessions in the same physical switch, say of:205, the physical ports 1 and 2 need to be configured in different vlans and subnets. For example, port 1 on of:205 is (untagged) in vlan 100, while port 2 is in vlan 101.

Furthermore, port 48 on of:205 carries both peering sessions to Quagga1. Thus port 48 should now be configured as a trunk port (vlan-tagged) with both vlans and both subnets.

Finally the Quagga interface on the VM now needs sub-interface configuration for each VLAN id.

Similar configuration concepts apply to IPv6 as well. Here is a look at the switch port config in ONOS for of:205